According to a new report by Redfin, nearly one-quarter (24.1%) of U.S. homebuyers looked to move to a different metro area in the three months ending in October 2022.

That is on par with the record high of 24.2% set in the third quarter and up from roughly 18% in 2019, before the pandemic ushered in the remote-work era that gave many Americans more flexibility to relocate.

The U.S. housing market has cooled significantly during the second half of 2022 as high mortgage rates, inflation and a stumbling economy deter would-be homebuyers and sellers. But of the people who are still buying homes, an unprecedented portion are relocating to new metros. Many are seeking relative affordability as near-7% mortgage rates and persistently high home prices make expensive parts of the country even more expensive.

The average 30-year-fixed mortgage rate was 6.9% in October, up 3.83 percentage points from 3.07% one year earlier--the largest year-over-year increase during any month since 1981. That has caused monthly mortgage payments for homebuyers to roughly double from a year earlier. And while rates have come down slightly in November, they're still significantly higher than they were last year.

Half of the top 10 migration destinations are in Florida (Cape Coral, North Port-Sarasota and Orlando are all on the list, in addition to Miami and Tampa). That's despite the fact that the state was hit by Hurricane Ian, one of the deadliest, most destructive storms in U.S. history, in September.

Relatively affordable Sun Belt metros are typically most popular with relocating homebuyers, largely because buyers can get more home for less money. In Las Vegas, for instance, the typical home cost $410,000 in October, roughly half the price of the typical home in Los Angeles ($823,000)--the most common origin for people moving there.

More homebuyers looked to leave San Francisco, Los Angeles, New York, Washington, D.C. and Boston than any other major metro. That's determined by net outflow, a measure of how many more Redfin.com users looked to leave an area than move in.

Homebuyers typically leave expensive coastal job centers more than they leave other places, a trend that started before the pandemic and picked up steam due to remote work and rising housing costs. They most commonly head to more affordable regions. Sacramento, where homes cost less than half what they do in the Bay Area, is the most common destination for people leaving San Francisco, for instance. 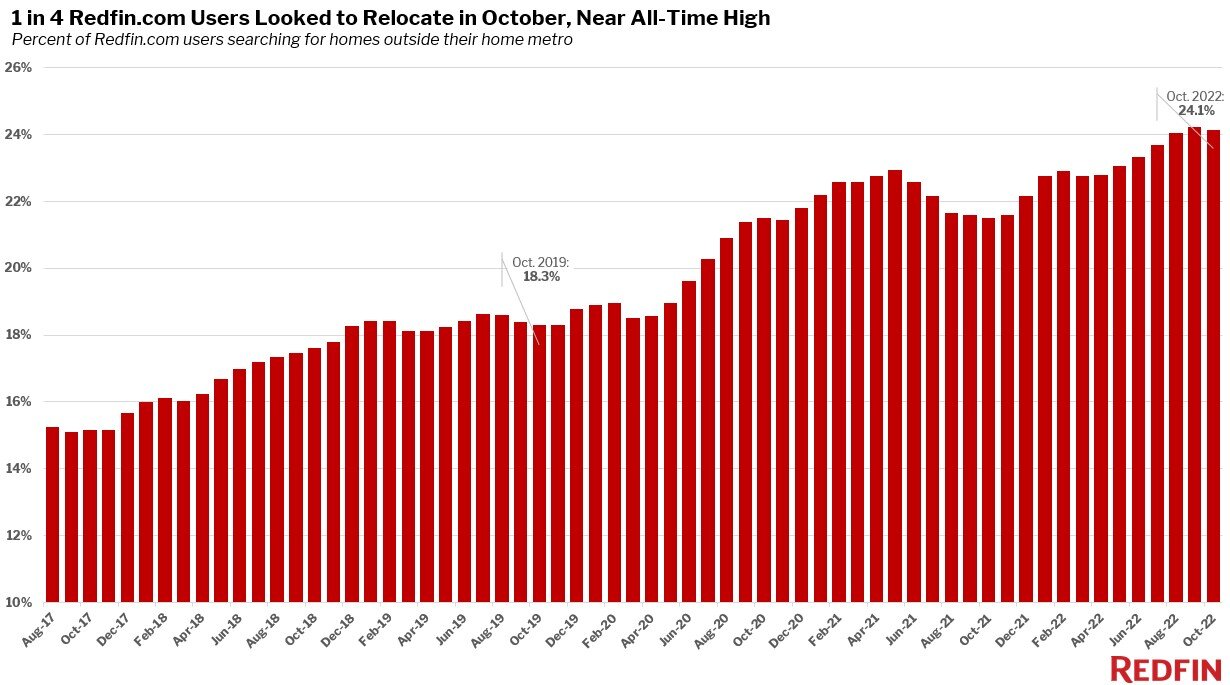